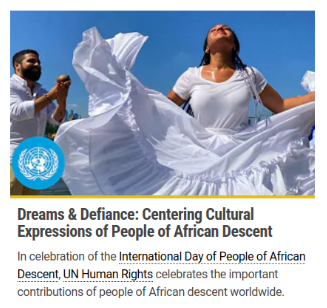 Every year on August 31st, the world celebrates the International Day for People of African Descent. The first time this day was commemorated in the world was on this date in 2021 via the United Nations. As mentioned on their website, “Through this Observance, the United Nations aims to promote the extraordinary contributions of the African diaspora around the world and to eliminate all forms of discrimination against people of African descent. On 19 June 2020, the Human Rights Council adopted the resolution on the ‘Promotion and protection of the human rights and fundamental freedoms of Africans and people of African descent against excessive use of force and other human rights violations by law enforcement officers.’ Pursuant to this resolution, the High Commissioner for Human Rights presented to the Human Rights Council at its 47th session her agenda towards transformative change for racial justice and equality.”  Thus, it is a reminder that even after chattel slavery was abolished in most countries in the world, Black people continued to globally suffer from racism, discrimination and segregation throughout generations even through today.

The United States has been long recognized as a leader in human rights around the world. Yet, there are some brutal realities that many Americans cannot hide from, which include that our country is still struggling to live up to its ideals, values, and principles regarding citizenship after centuries of existence. The United States has a long and brutal history of systemic racism that has been perpetuated through politics, economics, and socialization based on a preconceived notion of racial hierarchy. The impact of these injustices are continued to be seen today in the ongoing  inequity that faces Black Americans in everyday life.

The National Black Caucus of the Green Party of the United States is celebrating this International Day for People of African Descent with a call to action.

This Black Caucus is committed to building a new, just, sustainable and peaceful world for all. We believe that a new Black agenda is essential to solving the problems facing Black America and other marginalized communities everywhere. This Black Caucus is working to help  solve a number of issues that most negatively affect and impact Black communities including: the end of grave pandemic response effects created by our governments; distribution of reparations owed to Black American chattel slave and sharecropper descendants; and instituting  a Black agenda that is collaborated with and supported by active and retired elected officials, candidates and activists dedicated to promoting the interests of Black Americans nationally.

The National Black Caucus of the Green Party US is  working to address  electoral political issues  by encouraging Black Americans in the Green Party to run for office; and support candidates who will address issues such as criminal injustice, education, housing, employment and other issues that affect marginalized communities both in the nation and globally.

Therefore, This Black Caucus is  taking this opportunity to also promote, motivate, and support proactive community organizing, civic engagement, political education, awareness, and involvement not only today; but going forward  so that a better and far more inclusive world is realized for generations to come.

The National Black Caucus of the Green Party US proudly endorses and supports these current 2022 Candidates:

The Green Party of the United States is the party that can address the needs of Black voters.  We are running outside of the duopoly to restore humanity to the government.

Donate to support our candidates and help us grow into a force that can challenge the two corporate parties. The Green Party of the United States is a grassroots political party that stands for environmentalism, social justice, nonviolence, and grassroots organizing. We are on the ballot in most states, but not all. We need your help to get on the ballot in more states and to spread our message even further. Please donate today to help us continue our work.